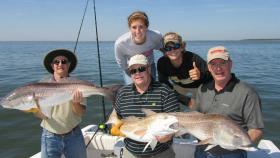 It could be called the year of the big bull reds. Catch reports now coming in suggest it. The action borders on being exceptional and is drawing a lot of attention.

For the past several weeks, and particularly during the past two, there has been action along the beach fronts and in the sounds that has produced untold numbers of adult red drum, many of which would measure in the 40-inch-plus range.

Read more of the FISHING FORECAST: Hunting for Reds in October