Fuzzy and Drew Davis: The Tides that Bind 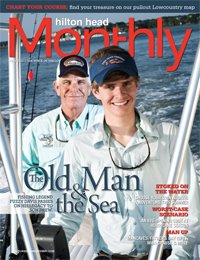 He’s been “gone fishin’” since the age of 3. One of his first memories of fishing with mom and dad on the waters around Hilton Head Island was hooking a sea trout, letting go of his rod and reel in youthful terror, and then spotting the cork and retrieving the lost fishing gear with fish attached — an hour later.

And now this lifetime of experience (not to mention impressive maritime pedigree) has landed Drew Davis the big one: his own charter business. And if that name sounds familiar, it’s because this start-up entrepreneur got his incubation on his mom and dad’s fishing boats.

Fuzzy knew early that Drew was headed for the water. “We’d put him in a baby car seat and take him out on the boat before he was a year old. He grew up loving it more and more. Fishing’s not something you can force kids to enjoy. They have to love it themselves.” (Fuzzy adds that he’s proud of Drew, but he doesn’t want to leave out 15-year-old daughter Kerry, an accomplished competitive sporting clays shooter).

Drew, a junior at Hilton Head Christian Academy, recently won his U.S. Coast Guard charter boat captain’s license at the bare-minimum age of 18. “It was kind of rough, going to school, going through the sea course, CPR training, and then setting up my business,” he said. He watched his good friend Justin Remegi get his captain’s license, and decided he wanted to do the same.

Though he’s worked summers as a mate for other charter captains, Drew knew he wanted to be in business for himself. To that end, he landed a restored custom 21-foot Boston Whaler that’s just large enough to zip out to the artificial reefs some three miles offshore, and small enough to crew himself.

“Yes, it’s just me and myself; I don’t have a crew,” he said. “The neat thing is I can fish in skinny water and then run out to 40-foot water. The boat can take mild chop but I don’t want to get into too deep and rough a water.”

He specializes in light tackle and fly inshore fishing, and also is available for dolphin watches and nature cruises. The sleek boat has been tricked out with a T- top that provides respite from the Lowcountry sun and a crow’s nest for fish-spotting and dolphin observing.

“If people just want to go out and not fish, that’s fine, but the main deal is fishing.” Marine life on his radar include tarpon, cobia, red fish, sea trout, Spanish mackerel, sheepshead, and shark.

Oh, and that list of favorite spots, tides and baits Fuzzy’s written down over the years? The one many a local would give his favorite rod to see? Fuzzy gave it to his son recently, and they plan to have it framed.

“Drew told me the other day he found a nice spot I didn’t know about, and I was ready to start drilling him, but he told me all about it,” Fuzzy said with a laugh. “You know, it’s not about the catch. It’s about enjoying being on the water. Being humble, kind to people, and helping them have a good time. We’re in the entertainment business.”

Freelance writer Mark Kreuzwieser couldn’t catch a fish if you handed one to him. He’s a lubber living in Bluffton.